Looking for a poet to come to your school, engage your students with poetry, host a slam, speak at your conference or write you a poem? Below are details of some of the most popular poets we have worked with for over five years.

Please get in touch to make a booking or discuss any enquiries: Oli@pagetoperformance.org 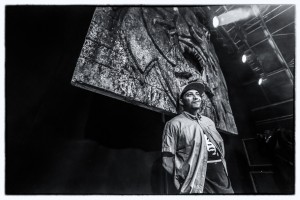 “Thanks for organising a great day with Inja, the students really gained a lot from the session.  It’s fantastic to have someone so enthusiastic, energetic and creative share their talent with us.”
– Strode College

“The room was in awe and when asked if they thought Inja should come to their schools to do this again they all roared out a “Yes!”
– Historyworks

Inja is a professional emcee who has been leading poetry, lyric and creative writing workshops for over 10 years. He works with all ages and abilities and has extensive experience of engaging N.E.E.T and hard to reach young people with literacy and poetry. He has performed with artists as diverse as Michael Rosen and Wiley, and has written and performed his work for The Guardian, Cambridge University, Southbank Centre and the BBC. 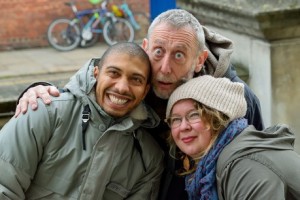 Inja writes on a huge range of topics: from healthy eating to fatherhood to Caribbean culture, Black British history and music. His workload is extremely diverse – from freestyling poetry to hundreds of giggling Primary school pupils, to creating teenage-friendly lyrics for History Works Black History commemorations, to running topical historical and theme-based writing workshops to people across the UK. His workshops are extremely popular with students as he is able to swiftly span the worlds of writing, poetry, rap and freestyle. Inja is also qualified to tutor in sound recording, editing and mastering music, using ICT music technology programmes such as Abelton Live, Reason, CuBase, Logic and Pro Tools.

When not running creative and lyric writing workshops, Inja is a professional touring emcee. He hosts the DMC World Championships – the world’s biggest djing competition -, performs and writes for Hospital Records, works with Dj Die’s diverse Gutterfunk label, hip hop reggae-inspired Dj Vadim and is a resident host to Warning and Hospitality drum and bass events across the UK and Europe. He recently toured Senegal as part of a British and French Council collaboration.

If not in your school, you may see Inja at a wide variety of festivals, poetry, and music events, bringing a smile to your face and some bass to you’re cheeks! 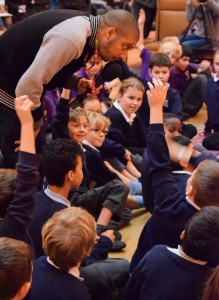 Inja – Fun in the Kitchen!:
https://youtu.be/dRigucg9x5k 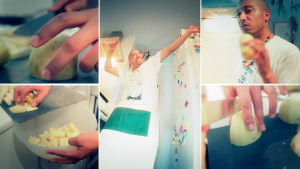 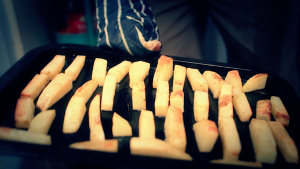 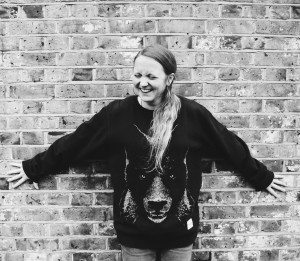 Hollie is a UK poet who straddles the boundaries between the literary, poetic and pop scenes. She has garnered titles like “chick of the week” (MTV), “boundary breaker” (Marie Claire)” and poet Benjamin Zephaniah stated “I can’t take my ears off her”. Her poem “Embarrassed” was tweeted to fans by renowned singer Pink. Her album Versus was released in October 2014, recorded at Abbey Road Studios, London. Her second collection of poems ‘Cherry Pie’, was released by Burning Eye Books in 2015 and a new book on parenthood ‘Nobody Told Me’ will make her the first poet to be published by Blackfriars, London, to be released February 2016

Hollie’s specialist topics to talk on include breastfeeding, motherhood, immigration and women in sport

“I can’t take my ears off her” –Benjamin Zephaniah 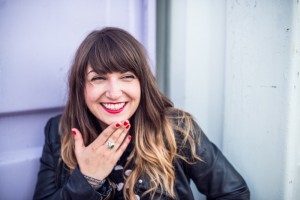 London Laureate, Laurie Bolger is a poet and presenter with a style that is consistently down to earth and accessible. Laurie has written and performed poetry for Tate Modern, BBC Radio 1 and 1Xtra, Queen Elizabeth Olympic Park, Royal Albert Hall, St Paul’s Cathedral and The Old Vic Theatre, as well as various commissions and workshops worldwide.
Laurie has just released her debut collection Box Rooms showing that poetry can be your friend. She is currently working her first Children’s Collection based on city life.
Laurie currently hosts BANG Said the Gun, London’s leading Stand-Up Poetry Night, Poetry Takeaway Live (live poetry made to order) plus her multi-award winning poetry podcast ‘Round @ Laurie’s’ live from Camden’s iconic Roundhouse.
www.lauriebolger.com
Instagram
Twitter
YouTube
“Laurie’s approach is enthusiastic and highly approachable. Pupils enjoyed energetic tone and sense of humour, they were eager to work with her and hear of her poetry.  She displayed a fantastic subject knowledge and gave detailed support advice to the group. We would love to work with her again.”
Karl Osmotherly, Teacher of English at Dunraven School, Streatham.
“Our students were gripped as Laurie’s assembly flowed seamlessly from personal anecdotes and humorous observations to rich and poignant poetry and back.
Creativity flowed non-stop during the poetry writing workshop with girls battling it out with the most adventurous and audacious Haikus…”
Anna Peduzzi, Deputy Head Governor, Parliament Hill School.
“I am warmed by the remembrance of our fantastic day of inspiration. The young people of Hampshire left inspired and enlivened, thanks to Laurie for all her hard work”
Claire Goymour, Head of English, St. Swithun’s School Winchester.
Laurie’s Youtube clips:
Laurie Bolger ‘Carrot Mash, Tea and Bill Bailey’
https://www.youtube.com/watch?v=LRdYh6FzqNk
Living In A Shoebox
https://www.youtube.com/watch?v=vXZaaM2I7ps 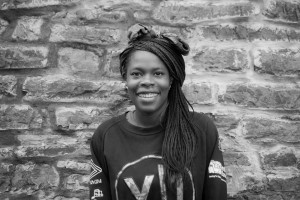 Vanessa Kisuule is an exceptional poet based in Bristol. She runs workshops in poetry, dance and creative writing across the UK and Europe. She is a member of the Great Britain Slam Poetry Team, alongside Harry Baker and Hollie McNish and is current Roundhouse poetry slam champion. Her first collection of poetry was released to critical acclaim and she was recently chosen by the BBC as one of the top four young females poets in the UK, filmed as part of their ‘Women who Spit’ series: http://www.bbc.co.uk/iplayer/episode/p02q6768/women-who-spit-take-up-space-vanessa-kisuule

Hannah is a poet from Cambridge and Essex. She has toured intensively both nationally and internationally doing theatre shows, readings and running workshops.She is passionate about engaging people with poetry and using poetry to have conversations.She believes that poetry is just another way of talking,that poetry is for everyone and that it is something that we need as we go forward.
She has made three poetry theatre shows and has worked as a poetry mentor with Apples and Snakes and Norwich Writers Centre. 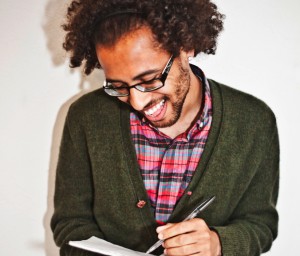 Dean Atta is a writer and performance poet. He has been commissioned to write poems for the Damilola Taylor Trust, Keats House Museum, National Portrait Gallery, Tate Britain and Tate Modern.Atta won the 2012 London Poetry Award and was named as one of the most influential LGBT people by the Independent on Sunday Pink List 2012. An ambassador for the Spirit of London Awards, he lives in London and teaches writing workshops across the UK.

Atta’s debut poetry collection ‘I Am Nobody’s Nigger’ was published in 2012 on The Westbourne Press.

“One of the UK’s finest poets” –Time Out London

Point Blank Poets is a poetry collective based in London, who work with Page to Performance to run events and workshops. They are a diverse group of poets, including Dean Atta, Sabrina Mahfouz, Deanna Rodger, Hollie McNish, Bridget Minamore and Chimene Suleyman. They have collaborated with organisations such as TRAID, Amnesty International, PEN and a number of other non-governmental organisations to raise awareness of various issues through poetry and performance. They can be booked both as a collective and individually.

Hailed as ‘a sharp blast of masterful hiphop’ by IDJ Magazine, the Skuff and Inja show is a live hiphop show, comprising two MCs, Inja and Skuff, beside DJ Toe. As well as touring, writing, recording and performing, the trio run performances for schools and youth clubs, working with organisations such as The Junction’s Dance Offensive youth scheme to involve young people in their lyrical and musical diversity. 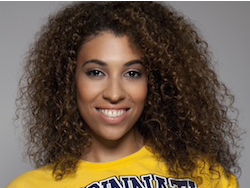 Laurie-Kay Hue has worked for Page to Performance since its conception. Specialising in hiphop and dance, she works selecting artists for shows and educational workshops and in general administration and promotion of Page to Performance events. As well as her work with Page to Performance, she is a professional dancer, graduating in dance and musical theatre in 2009 and working in the West End’s Thriller Live for the last 2 years as one of 5 lead female dancers. She is a music enthusiast and knows more about the latest trends in pop and hiphop than anyone we have ever met!

Sarah is a street dance specialist and dance choreographer based in Ely, Cambridgeshire. She is a fully qualified ISTD dance teacher and runs her own dance school – ‘Funk it Up’ www.funkitupdancegroups.com. She has been commissioned by a number of organisations including South Cambridgeshire Council to work with schools, young people with learning difficultiies, hard to reach young people and the Ely young parents scheme. She has worked on a number of projects with Hollie McNish, combining spoken word with dance and movement, performing in the East of England as well as further venues, such as at the Dancehouse Theatre, Manchester. 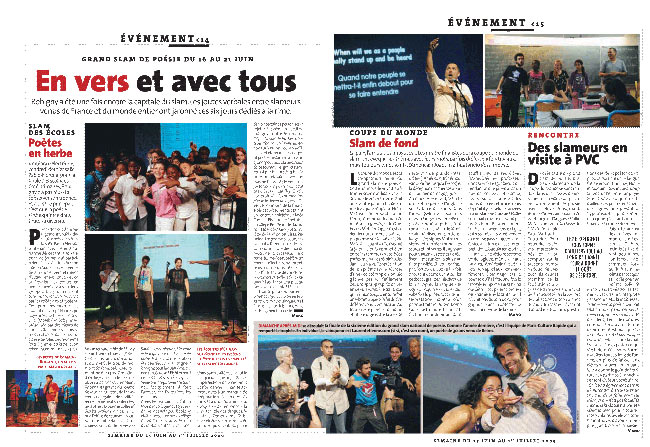